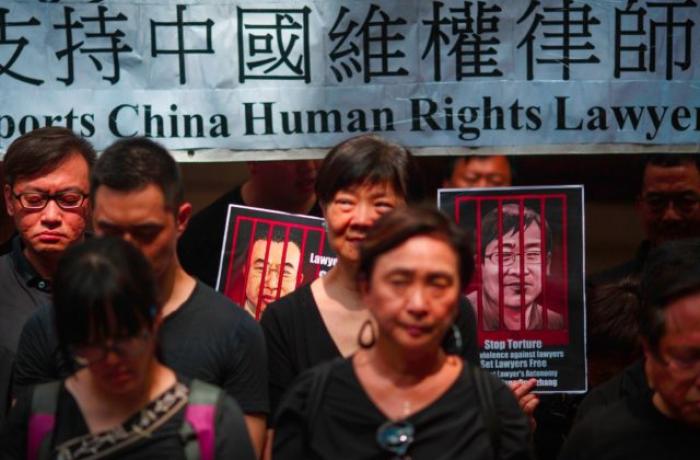 Many lawyers, after their “non-release release,” are subjected to a form of an additional sentence, “a suspension from life”—they, and even their family, are deprived of all the normality and essence of life.

Ten years ago, my colleague Jerry Cohen and I wrote an op-ed about the disbarment of Chinese human rights lawyers Mr. Tang Jitian (唐吉田) and Ms. Liu Wei (刘巍). They were disbarred for allegedly “disrupting courtroom order and interfering with regular litigation process.” What they actually did was to submit their defense opinion to the court and walk out of the courtroom peacefully as the presiding judge would hear none of their defense for a Falun Gong practitioner.

On today’s 10th anniversary, Jerry Cohen and Eva Pils, with my collaboration, published a piece remembering Tang’s case and the efforts of the human rights lawyer movement in China (article link here).

I would only add that, back in 2010, the disbarment of Tang and Liu was astonishing news. But not anymore. Today it has become commonplace for human rights lawyers to be stripped of their lawyer’s license and to have their law firm closed. Human rights scholar/advocate Teng Biao estimated that, since China’s 2015 “709 Crackdown,” at least 50 rights lawyers have either been disbarred, had their practice license revoked, or have been unable to pass the annual inspection required to renew their license year after year. It was not a huge community to begin with, so 50 is a big portion. Many of them have nevertheless tried to continue their legal work. In 2018, a number of lawyers who have lost their practice license formed a “Former Chinese Lawyers Club” (中国律师后俱乐部) to advise clients and train other lawyers, but even that was quashed quickly by the police.

Tang’s fate of disbarment, as well as his enforced disappearance and torture in China’s 2011 “jasmine revolution” crackdown, was a forewarning of what was to come—and worse—for his fellow lawyers in the following years. Many more rights lawyers have been detained, and some have been convicted and jailed for years, especially since the “709 Crackdown”. New prosecutions are still happening. Even after these lawyers have paid a price by serving an unjust sentence, they often remain unfree, living in the shadow of strict government surveillance or simply put under “house arrest” indefinitely.

This is what Jerry Cohen calls “non-release release.” Sophie Richardson of Human Rights Watch calls it “permanent prison.” Both are apt descriptions. I see it as a form of an additional sentence, “a suspension from life”—these lawyers, and even their family, are deprived of all the normality and essence of life. And sometimes it can be “a suspension from life” for life, such as what has happened to lawyer Gao Zhisheng, who has been repeatedly disappeared over the years and is still missing. His family, who have fled to the US, have been in agony waiting to hear any news about Gao.

In a rare piece of good news, rights lawyer Wang Quanzhang—the last lawyer tried in the “709 crackdown”—reunited with his courageous wife Li Wenzu and son yesterday after almost five years of detention. Those who watched the video of the family reunion must have shared their tears of excruciating pain and overwhelming joy. But will he and his family be truly free? Or will they too be sentenced to “a suspension from life”?