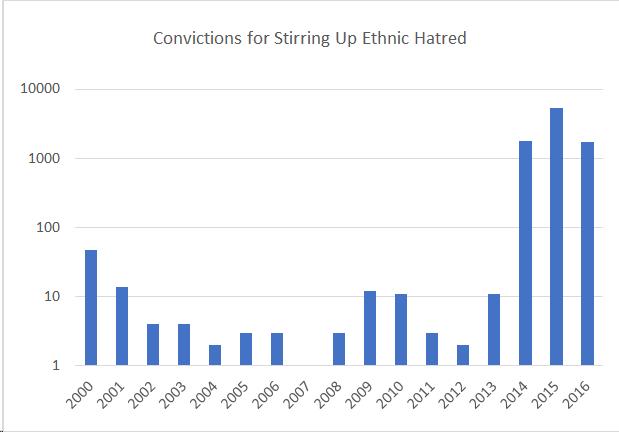 Not surprisingly, ethnic minorities are convicted of the crime of stirring up ethnic hatred at a far higher rate than Han—not counting some outliers, usually 20 to 40 times as often, adjusted for population. The real shocker is the absolute numbers: typically in the single or low double digits from 2001 to 2013, and then leaping up to four digits in the next three years, reaching over 5,000 in 2015.

This is the second installment of some discoveries I’ve made looking through a multi-volume collection of Chinese court statistics. (First installment here.) In this installment, I look at convictions for the crime of stirring up ethnic hatred (煽动民族仇恨).

Nobody will be shocked to learn that those convicted of this crime are almost always members of one of China’s ethnic minorities. From 2000 (the first year in which conviction statistics appear) to 2016, the percentage of convicts who were ethnic minorities is usually well over two thirds. (Apologies for the graph; data is missing for some years, and I can’t get rid of the extension of the Y axis to 120%.) 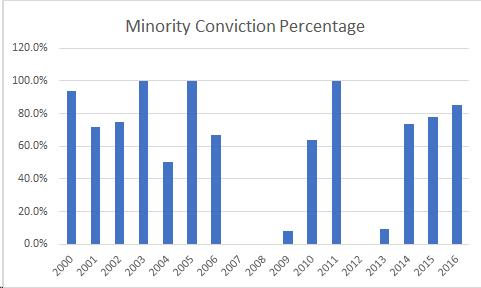 But of course things are actually more extreme, because you need to adjust for population size. Let’s look at the conviction rate: how much more likely is a member of an ethnic minority to be convicted of this crime than a Han? Here, the year 2000 was evidently quite an outlier, but generally we see that minorities are convicted at about 20 to 40 times the rate that Han are convicted. Note also, though, that the rate has increased sharply from 2014 to 2016. (I’m not comparing those years to earlier years, for reasons I’ll explain below.) 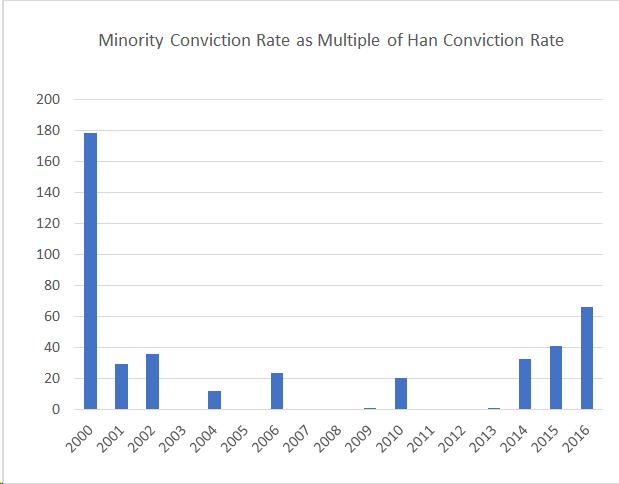 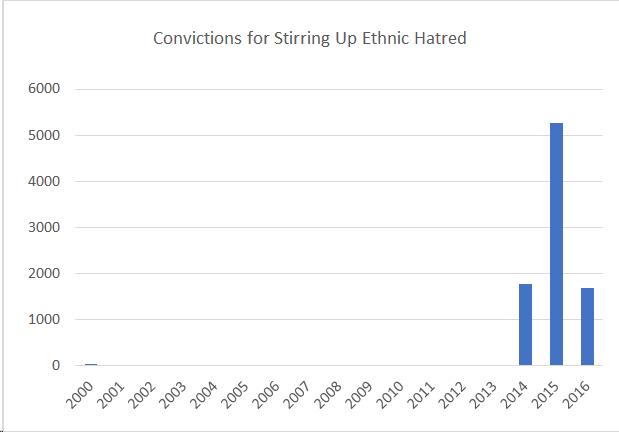 Here’s the same graph using a logarithmic scale on the Y axis; it shows the original data better:

What’s going on? I have no idea and would welcome readers’ thoughts. It would seem that some policy decision was made to take prosecutions under this heading to the next (and the next, and the next) level. A vast number of actions that had never previously been considered to constitute this crime now counted and presumably still count.

For those who want to play with the original data, here it is. I had to infer minority populations from numbers from the 2000 and 2010 census, and then use the percentages in those years for other years in which only the number for total population was available. Not perfect, but the best I could do.