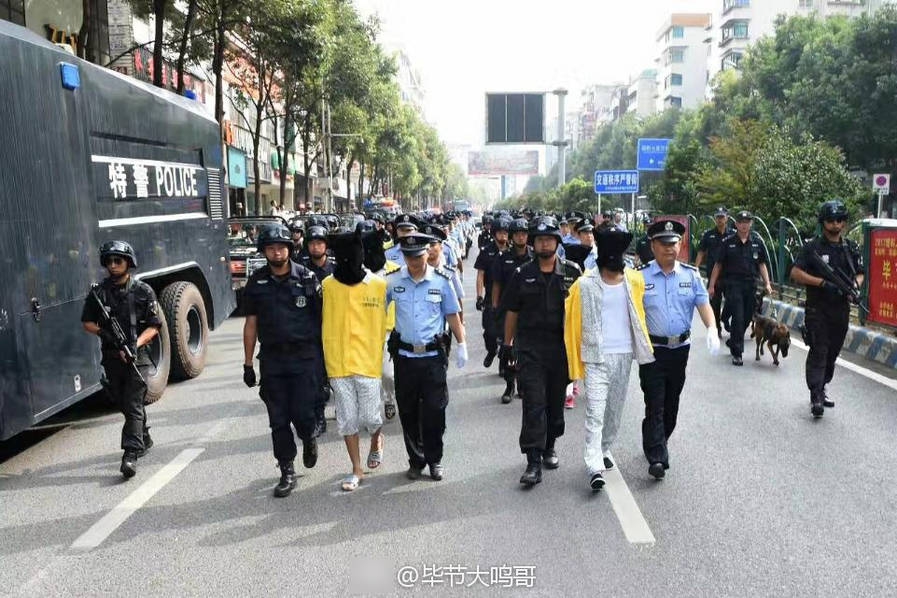 As part of their campaign to establish as “Rule-of-Law Bijie,” authorities in Qixingguan District of Bijie City in Guizhou Province recently decided it would be a good idea to brazenly violate a rule that has been around since 1988 (originally this rule, now this rule): that even convicted criminals, to say nothing of mere suspects as was the case here, may not be paraded around on public streets. On August 4th, the Qixingguan sub-police station mobilized over 400 policemen, 30 command vehicles, troop carriers, patrol vehicles, 80 police motorcycles, an anti-terrorism armored vehicle, and an anti-riot water cannon vehicle — all to escort 100 unarmed and hooded suspects in a parade down what appears to be one of the town’s main streets. As you can see from the picture below, the townspeople don’t appear all that interested; there isn’t a big crowd lining the sidewalks.

It’s hard to figure out what the authorities thought they were doing here: given the paucity of spectators, few people were intimidated, but you certainly don’t need all that force just to keep control of 100 unarmed and hooded men. Maybe the local police chief just wanted to show off his toys to colleagues and rivals.

Although parading suspects and convicts (particularly those sentenced to death) through the streets used to be popular, the practice for those sentenced to death was prohibited several times beginning as early as 1979, although prohibition after prohibition was ignored (as this 1988 regulation complains in a tone of obvious frustration), and the practice for all criminals and suspects was specifically banned in 1988 by the same regulation. The reason: it creates a bad impression domestically and internationally. It still does.