Over the past few days there has been quite a bit of controversy in China over the government’s decision to take crack down on unlawful housing in the wake of a fire and essentially expel large numbers of migrant workers (many of whom were in reality residents of Beijing). Here are some news stories: South China Morning Post | Financial Times.

Many intellectuals and others have objected; hence the controversy. Among them is He Weifang, a well-known professor of law at Beijing University and public intellectual — although perhaps I should say “former public intellectual,” since the government has blocked virtually all his access to any public platform. So thorough is the blocking that he has apparently been reduced to sending handwritten messages (remember handwriting?) for circulation by supporters. Here’s his latest. The translation is mine; a photo of the original note follows. I should add that I don’t know personally that it’s genuine, but it was retweeted by Xu Zhiyong, who probably knows what his handwriting looks like. Suggestions for improving the translation welcome.

【Respect Every Citizen】In recent days the expulsion by Beijing of outsiders has elicited broad comment and stern criticism. Even though China’s current constitution has not to this day provided for the freedom of movement of citizens – something that is common in the constitutions of civilized countries – the government’s unilateral expulsion from the city of people who have already settled and make their living here, without any statutory authority, with no discussion at the People’s Congress, without any consideration whatsoever for the personal and property rights of citizens, and using barbaric methods with no thought of consequences, is truly a gigantic satire of the so-called “core values.”

Even worse, officialdom actually created the Nazi-like term “low-level people” to serve as a pretext for expelling some people. Let me ask: what is “low-level”? What is “high-level”? Shall it be determined by official rank? By salary? By educational level? The development and flourishing of Beijing over the past ten years is utterly inseparable from the hard work done by outsiders and their low-paid contributions. A harmonious city must have the complementarity of people of different income levels. We need fancy shopping malls and also need convenient sidewalk vendors; we need rich people who spend money like water and also need low-income people who are on the go every day to feed and clothe themselves … 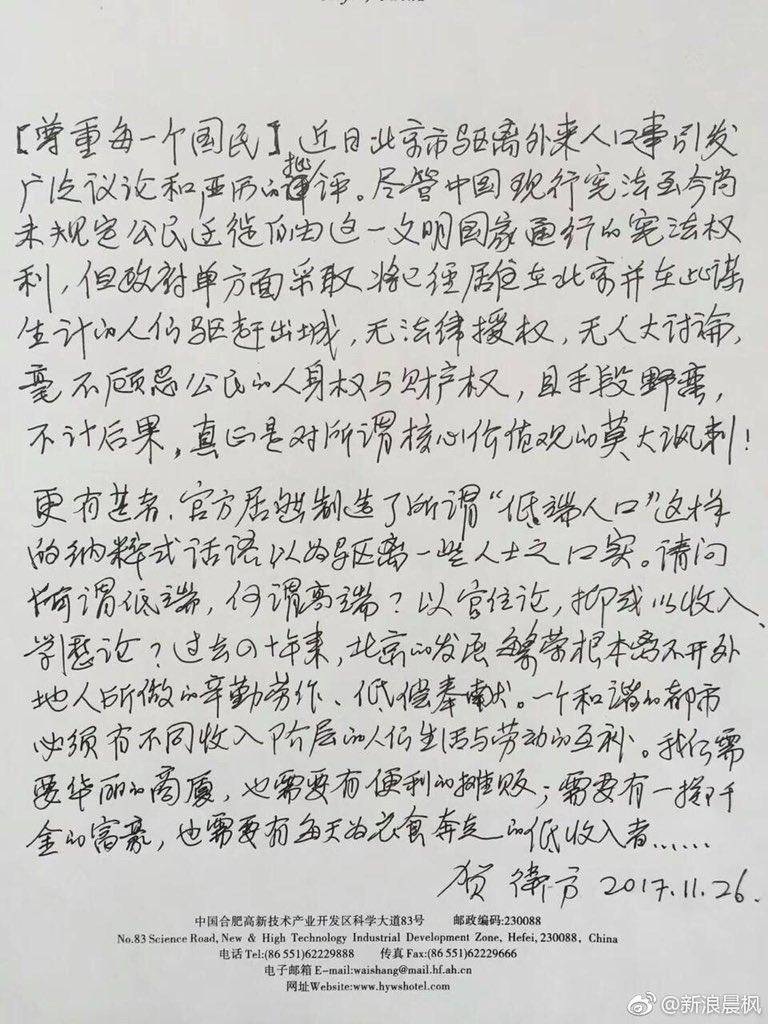