[CORRECTION JAN. 8 2018: I have learned that the writer is a she. Please deem all relevant pronouns as changed accordingly.]

A Chinese student of mine recently brought to my attention this interesting WeChat post. In it, the writer (who I shall subsequently refer to as “he,” although I don’t know the gender) explains why he decided not to apply for a position as assistant at the Beijing bureau of the New York Times. Despite his great admiration for the Times, he writes, upon visiting its Chinese-language website he was dismayed to discover that the stories in the most prominent positions were all about one thing: human rights (“在最显眼的位置，你看到的报道仍然只事关一件事，人权”). He extends the charge to foreign media in general: “All that the big [foreign] media see are just human rights problems” (or “the human rights issue”) (各大外媒看到的，都只是人权问题). The writer then condemns foreign media reporting for its lack of diversity and for its lack of respect for the agency of Chinese people.

If the premise were correct, then the condemnation would certainly be warranted. But is the premise correct? And if not, why do so many people think it is correct? Let’s examine these questions in turn.

Whether the premise is correct can be addressed in two ways: (1) a carefully designed study that is methodologically unassailable, or (2) a quick impressionistic survey. Neither the writer nor I have the time or expertise to do the first, so he did the second and so will I. But the quick impressionistic survey leads to results utterly different from the writer’s claims.

(1) Let’s look, as he did, at the front page of the Chinese edition of the New York Times (which, like the English edition, is blocked in China). Here’s a screen shot of the top stories from Jan. 5th: 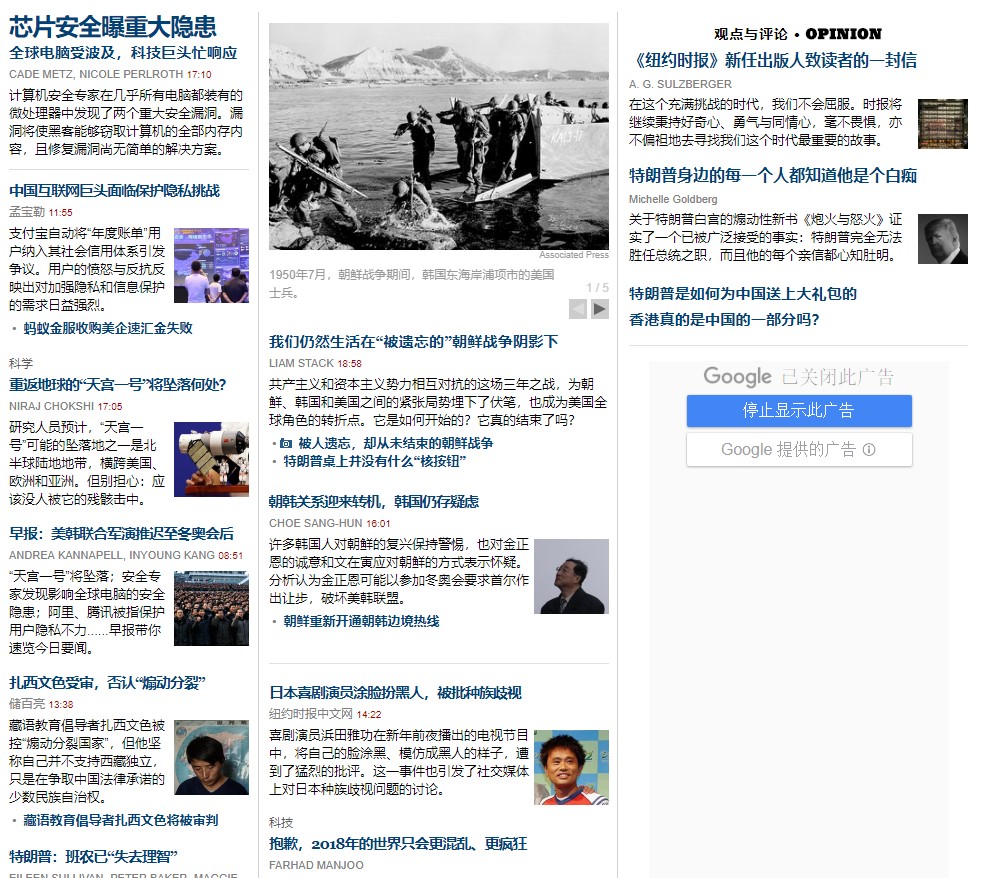 There are three articles about China here: one about privacy concerns on the Chinese internet, one about the trial on splittism charges of the Tibetan Tashi Wangchuk, and one about Sidangkou, China’s “saxophone city.”

(2) But maybe the writer meant that articles about China were all about Chinese human rights issues. So let’s look just at the China page of the NYT’s Chinese website. As of today, the top article is about a Chinese satellite that is returning to earth. Because it’s accompanied by a large photo, I’m going to leave it out of the following screen shot of the remaining articles:

No matter how one looks at the NYT’s Chinese-language website, then, one can hardly conclude that it has an exclusive, or even primary, focus on human rights issues.

(3) Well, what about the NYT’s English-language site? I went online yesterday and downloaded the 50 most recent articles with “China” or “Chinese” in the headline. I won’t list them all here; anyone who’s interested can download the list here. Again, impossible to see in this list an exclusive or even primary focus on human rights.

(4) What about other newspapers? Here are the most recent 50 stories from the Financial Times and the Wall Street Journal using the same search strategy. Same conclusion as before. Indeed, these quick media surveys would tend to overstate, not understate, the prominence of human rights-related coverage, because the Chinese government often schedules trials likely to generate negative coverage for the Christmas season, when they are less likely to attract press and public attention.

(5) Well, OK, but what about books on China? Are English-language readers learning nothing about China beyond human rights problems? Again, the evidence suggests not. There are plenty of big-selling books on China that do exactly what the writer wants: introduce a diverse China to readers as a place where there’s lots of interesting stuff going on. An unfairly small list would include books like Ian Johnson’s The Souls of China, Evan Osnos’s Age of Ambition, Peter Hessler’s Country Driving, Leslie Chang’s Factory Girls, and Michael Meyers’ The Last Days of Old Beijing (I haven’t read his most recent book, so can’t comment on that). These books are full of diversity and agency.

Just google “best books on China” or something like that. I would not recommend every book that appears on every such list, but here’s a good list called “20 China books to read (and 5 to avoid).”

In short, is the charge of an exclusive focus on human rights sustained? The tentative answer from this preliminary survey is pretty clear: no.

To me, the more interesting question is why the writer, and so many other people, believe the writer’s charge to be true. Some of my Chinese students make the same complaint to me: that the Western media doesn’t cover China fairly and that it focuses almost exclusively on human rights issues, to the exclusion of many other important stories.

Now, I have lived long enough to know that nobody ever wins an argument on the internet. Thus, I’m just going to pose some questions to people who hold the writer’s view: How do you know this? What accounts for your confidence that this is true?

I am surprised when I hear this view expressed by Chinese students who have just come from China, because I wonder: Really? What do you know about what even one English-language newspaper, let alone the whole of “Western media,” says about China? The English and Chinese websites of the New York Times are blocked in China; did you really regularly access them? Did you regularly read the New York Times and other English-language newspapers in China? And if you somehow really did have the time and language ability to immerse yourself in the China coverage of a wide variety of newspapers, how, given the findings of my quick survey above, did you come to the conclusion that all the Western media talks about is human rights issues?

Again, my desire here is not to win some argument. If you were indeed regularly reading Western media—and only you know whether this is so—and this is the conclusion you came to, then I won’t pursue the matter further. But if you weren’t regularly reading Western media, then you have to ask yourself: “Where did the impression I have of Western media coverage come from?” I think the answer is clear: it came from Chinese media, which you were reading. Now I know what you’re going to say: “Hey, I’m not stupid; I know that Chinese media is subject to state control and reflects what the Party wants us to think, and I can take account of that in assessing the value and truthfulness of what I read.”

You do know that and you’re not stupid. Regrettably, that is probably not enough. As Nobel Prize-winner Daniel Kahneman shows in Thinking, Fast and Slow, even if we know an information source to be biased, we still tend to accept the information, particularly in the absence of information offering a competing story. The Party does not pour vast resources into control over information just to see no results.

I don’t think the writer of the WeChat post was trying to lie or mislead anyone. But I do think that when he first thought about the problem, he was already in the grip of a powerful narrative: that of a biased Western press that focuses exclusively on human rights problems and ignores the complexity of China. That explains how he could do what we just did—make a quick survey of what the New York Times and other media outlets were reporting about China—and see something that simply was not there.

It’s alarming, of course, that even well-intentioned people can make such mistakes; it means we’re all (myself included) vulnerable to error, no matter how hard we try. It would be nice if we could avoid the error in the first place, of course, by always asking ourselves, “Wait—do I really know this to be true?”, but the next-best solution is to listen carefully to the presentation of evidence pointing the other way.

Please note that this is not a claim that English-language media coverage of China could not be improved (even though I do think that the major newspapers by and large have a pretty impressive group of journalists covering China). I’m claiming that the charge that China coverage focuses exclusively or even primarily on human rights, and neglects other aspects of the China story, is not sustained by preliminary evidence. And since this kind of preliminary evidence is the only kind most of us gather, it’s worth thinking about why, in spite of the evidence, this mistaken idea persists with such vigor.

ADDENDUM (JAN. 8, 2018): For anyone interested in academic studies of Western media coverage of China, I did a quick search of the Bibliography of Asian Studies for all articles indexed as relating to China in which the word “media” appeared in the title. I found four apparently relevant articles in the first 200 hits (which took me back to 2010). Here’s the list:

I could quickly find only the Goodrum et al. study on line; I regret I can’t post it here for copyright reasons. (I have access through my university’s IP address.) It’s good because it reviews the literature and its bibliography includes references to earlier apparently relevant studies (please forgive the inconsistent citation style):

The Goodrum et al. study confirms (in my view, anyway—but see for yourself if you’re inclined to disagree) that Canadian media don’t obsessively focus on human rights problems, although they certainly don’t ignore them. My guess is that the Canadian English-language media canvassed here (the CBC and the Toronto Star) aren’t too different in their coverage from mainstream English-language media in other countries (e.g., the US).

2 thoughts on “Does English-language (or more broadly, “Western”) media focus too much on human rights issues in China?”