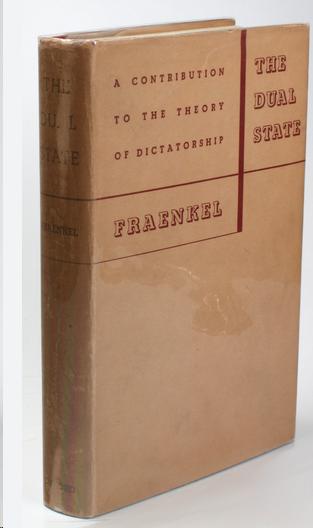 Is China a dual state in the sense of Ernst Fraenkel’s conception? I’ve been thinking about this a lot and ultimately conclude it isn’t, and have just posted a short paper on SSRN explaining why. Here’s the abstract.

Ernst Fraenkel’s theory of the dual state, as set forth in his book The Dual State: A Contribution to the Theory of Dictatorship, has attracted the attention of scholars of Chinese law. This paper argues that, contrary to the views of many of these scholars, the model of the dual state—a Normative State coexisting with a Prerogative State—simply does not fit China unless that model is stretched so far as to be substantially different from the one actually proposed by Fraenkel. First, the Chinese state does not present institutionally the kind of duality observed in dual states. There are, for example, no special courts that can seize jurisdiction over political cases from ordinary courts. There is no need. Second, if there were duality, there is little basis for thinking that the counterpart to the Chinese Prerogative State is a Chinese Normative State of the kind imagined by Fraenkel. Unlike Germany, China has never had the latter kind of state. If there is a counterpart state, it may be a third type not imagined by Fraenkel’s model.