The other day on Twitter I quoted Tsai Ing-wen and posed a question:

“We believe that the Taiwanese people should decide #Taiwan‘s future.” All you folks who like to talk about history, the KMT, the Qing empire, etc.: do you actually disagree with this statement? Come out and say so openly. 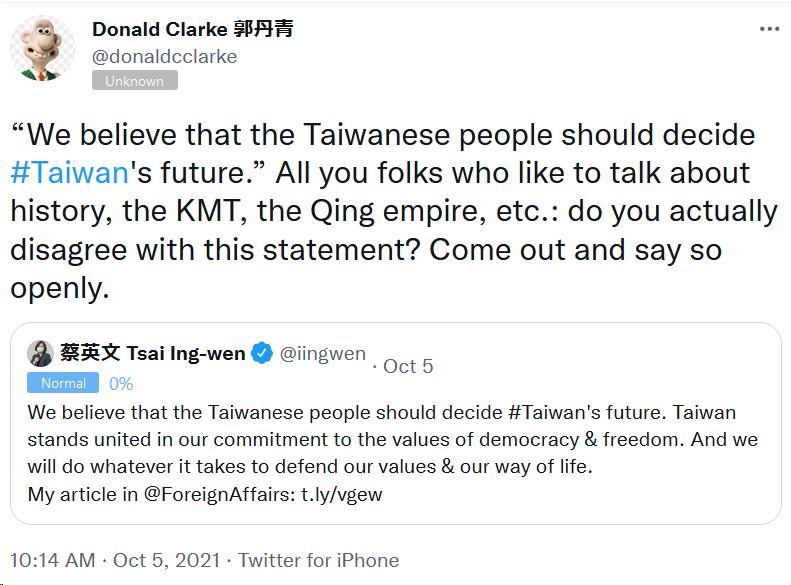 I certainly agree that Taiwan’s people should have a much greater voice than they’ve had. But do you think that it’s really so simple, that theirs should be the only voice? That the history, the diplomatic agreements, etc. don’t complicate things at all?

OK, a reasonable question. Yes, it’s complicated – in fact, way too complicated for a simple answer on Twitter, so I decided to put together this blog post to set out my thoughts.

I asked the question because it’s my instinct, as a lawyer, to try to identify and narrow down the points of actual contention in any debate. Often it turns out that people are arguing past each other, or perhaps even agreeing on something without realizing it, so we can save a lot of time and energy by identifying what’s really disputed and what isn’t. If I find disagreement in talking to someone about Taiwan, I want to know whether we are disagreeing about the best way to get as close as possible to an agreed ideal, or whether we are disagreeing over the ideal itself. As I will show, it matters because different kinds of arguments are relevant and permissible depending on whether the disagreement is of the former or the latter kind.

Take another example: should the people of South Korea have the sole deciding voice in their future? Should anyone other than the people of South Korea decide? To the extent they are not harming anyone else and not asking anyone else to help them, I think the answer is not complicated: Yes, it should be up to the people of South Korea alone. (Obviously, if they want other governments to support their decisions, they need to take into account what those governments think; nobody is going to write them a blank check.) It does not follow as a policy consequence that one should ignore the North Korean government as if it were not there. We live in the real world. But there is a big difference between taking account of the real world on the one hand, and asserting that the North Korean government has a legitimate interest in wanting to bring South Korea under its control on the other.

When we move to the question of Taiwan, clarifying the normative stance of participants in the debate serves not just to prevent people from wasting time arguing over things that aren’t really disputed; it also serves to separate out relevant arguments from irrelevant ones.

Suppose you believe that the people of Taiwan should have the decisive voice in their future. This does not commit you to a particular policy for achieving that ideal. It doesn’t mean that you ignore the presence of China and its missiles pointing at Taiwan. It doesn’t mean that you ignore the fact that the Chinese leadership believes – strongly believes – that Taiwan should be part of the PRC, under the control of the Communist Party of China, like the mainland. But a critical part of this realpolitik approach – one of the very things that make it realpolitik – is that it doesn’t matter why the Chinese leadership thinks this way. The fact that they do think this way is all that matters (unless, very implausibly, you think that they could be reasoned out of their position by rational argument and evidence).

Hence the challenge in my tweet that asked people to identify their basic stance on the normative question. If you believe that the people of Taiwan should have the sole voice in their future (subject, as I mentioned above, to the need to take account of the views of anyone they expect to support them), then all the arguments about history, what year Taiwan was incorporated into the Qing Empire, various agreements that may or may not have been made by various people and organizations over time, and what they really mean – they’re all irrelevant. We can finesse all these debated questions because they don’t matter. The thing that matters – and I would never deny that it matters – is the practical fact that the PRC government has a particular view of Taiwan. What to do in light of that particular view – now that is a complicated question without an easy answer.

Thus, if you are making arguments about history, then it seems to me that you are making them in support of some kind of normative claim, rather than undertaking a strictly practical, realpolitik analysis. A historical argument that backs the Chinese government’s view is more than simply the advocacy of realism; it is a denial of the basic normative position that the Taiwanese people alone should decide their future, and an affirmation that it is normatively desirable, not just an unfortunate necessity, for the government of China – in effect, the Party leadership – to have a say as well. It is of course possible to take this view – there’s nothing illogical about it – but I think those who take this view should own it.

Let me finish with a look at the normative question itself. Far more convincing to me than the historical arguments on each side is a simple human welfare analysis, which I think should be the touchstone of any policy or action. Does it make people better off? It’s not always easy to answer the question, but I cannot think of a better guide to analysis.

And I cannot for the life of me see how a forcible annexation of Taiwan by China adds to human welfare. Let’s suppose Taiwan could be annexed to China without the use of force or indeed any other kind of disruption; that the people of Taiwan suddenly by magic found themselves living like ordinary PRC citizens, under the PRC’s political system. (This is how we can state this as a potential normative goal, separate from the practical issue of how to achieve it.) Is anybody going to argue that they would be better off than they are now? If not, then at the very least it’s not a Pareto-efficient move.

Is it Kaldor-Hicks efficient? In other words, is there some benefit to others (PRC leaders and citizens, for example) that more than offsets the loss to Taiwanese? Let’s suppose for a moment that we can do what economics forbids, that is, make interpersonal comparisons of utility. What exactly would the offsetting benefit be to PRC leaders and citizens? The only thing I can think of is the possible psychic benefit of being able to put on a parade to one’s own glory and putting those uppity Taiwanese in their place. However real those psychic benefits may be to those enjoying them, should we value and respect them?

And all this is based on assuming a magical, instant transition into a regular PRC province. In fact, of course, there would be considerable disruption costs, possibly involving war, death, and destruction on all sides. This just makes more stark the question of how exactly human welfare is enhanced by an annexation. I really wish someone would explain to me who specifically is made better off (and how) by bringing Taiwan under PRC control, and why we should want to make them better off in spite of the undeniable costs. Abstract arguments about history simply don’t cut it.